Success comes from within 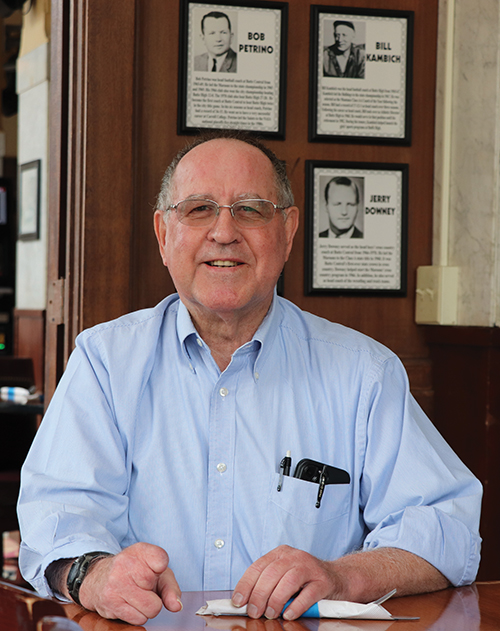 He made no formal announcement.

He wouldn’t even let his people throw a retirement party for him.

But, as he said in an interview in the vault in Metals Sports Bar, “I’m a totally retired individual. I don’t have any place to go, which I’m happy with.”

Well-known for his restaurants, he began that aspect of his career in 1983. He opened McDuff’s, Pancake and Steak House. Then, he said, “It was just me and whoever I could get off the street.”

He had been selling for Coca Cola, and was in and out of kitchens, bars, restaurants, and taverns, he said. When the Best Western opened, there was a space for a restaurant.

McDuff’s  was successful, but year after year he found himself working longer and longer hours, while taking home less.

At that time franchises such as Wendy’s and McDonald’s were coming on strong, and he began to look at that concept. He noted that there were good franchises and poor franchises, and the longer he weighed the pros and cons of each, “Perkins kept coming to the top.”

In 1990 Ueland turned his McDuff’s into a Perkins, and that restaurant was successful, Ueland said.

After the Butte Perkins was established came an opportunity to open up in Kalispell.

Perkins corporate approached Ueland about opening in Kalispell, and at first he was reluctant. But the company had purchased the location already, and Ueland wasn’t keen on having  corporate stores in his backyard. He decided to go forward with the project.

“From there, I got into the growth mode,” Ueland said.

After Kalispell, he opened in Missoula with funds he obtained by selling his interest in the Kalispell restaurant to his partner there. That was in 1992

With success in Missoula under his belt, the Butte entrepreneur opened in Helena. After that he purchased an existing Perkins in Bozeman. After Bozeman came Hamilton. “And so I had six Perkins restaurants, and they were doing great.”

The employee/partner buyouts that became a hallmark of Ueland’s began with the Kalispell sale.

Ueland attributes the success of his Missoula operation to the management team that he developed in Butte.They lay the foundation for the Missoula Perkins.

Ueland’s son-in-law was part of that transplanted management group, and he became general manager of the Missoula Perkins. Eventually, Ueland sold him the Missoula restaurant

With those funds, Ueland opened a Perkins in Helena. As Ueland expanded, he hired a Perkins corporate executive as his regional manager.”so that I didn’t have to constantly travel to check up on all of the restaurants,” he said.

The regional manager became the manager of Ueland’s Helena Perkins, and he wanted to become an owner as well. Ueland, of course, sold the Helena property to the Helena manager.

Next came Bozeman. There, Ueland brought a combination of his Missoula and Helena management teams to get his operation underway. “The moral of my  story is that I’m developing management people within my existing restaurant, within my existing employees to advance without always having a new set of employees from managers down to dishwashers,” he said.

The same pattern held when Ueland opened his Hamilton Perkins. By then he had a pool of assistant managers that could be promoted to general manager.

When he interviewed applicants for entry-level positions, Ueland would ask himself, “Are these potential managers?” And he would think even beyond that. He would wonder if the person might also be a future owner.

When the time comes to sell, Ueland said that he makes sure that the price of the real estate isn’t so high that the new owner can’t make a go of it. “I love these kids. They’ve done a good job for me. So I don’t want to ding them so badly that they can’t go forward and then go out of business”

Ueland and the potential new owner sit down and discuss what would be comfortable for buyer and seller alike. “It’s not about the almighty dollar,” Ueland said.

He solved the restaurant turnover problem by promoting from within and by offering ownership opportunities.

He bought the padlocked M & M bar and grill, turned it around and sold it to an employee. Ueland also owned the Metal Sports Bar and Grill. He sold that operation to its management team.

By the time he looked at the Metals Bank Building, Ueland had eight restaurants and the office staff to go with the operation. But things were cramped.  They were trying to run his company out of the back room of his  Butte kitchen. He was looking for office space.

By then his brother Ron had moved from Greeley, Colo. to Bozeman, and he wanted to “come home” to Butte, Ray said. He was in the ag chemical business and was looking for office space as well.

It was Ron who first spoke to Boyd Taylor  about renting space in the Metals Bank Building. Jokingly, Taylor suggested that the Uelands  just buy the building, Ray said.

The more they talked about it, the less of a joke it became, Ray said.

The brothers  bought the building and developed it. It includes residential condos, office space, and two restaurants. Ray hopes that the Euland’s success inspires other developers who are looking at old buildings in Uptown Butte.

Ray recently became a great grandfather, in addition to having 14 grandchildren. One of the benefits of retirement, he noted, was being able to travel to Washington, DC to visit that great grandchild.