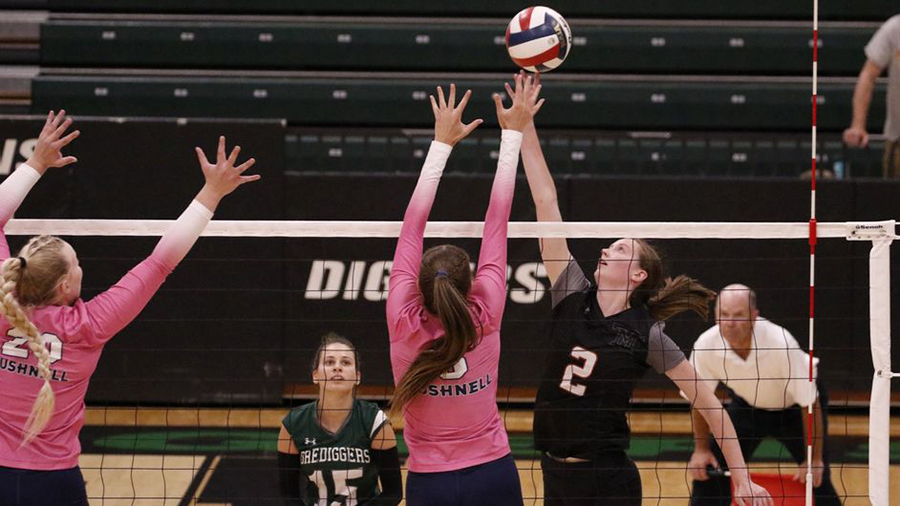 BILLINGS, Mont. - Montana Tech volleyball got back to their winning ways on Saturday at the Frontier Conference Preseason Tournament at the Fortin Center defeating Carroll College and host Rocky Mountain College in straight sets.

The Orediggers defeated the Saints behind some solid play at the net all three sets. Montana Tech hit for a .234 mark on the attack registering 50 kills on 128 swings. The Diggers limited the Saints to just a .126 efficiency while having just 34 kills compared to 18 errors.

Leading the Orediggers  at the net was the trio of Taylor Henley (12), Maureen Jessop (11), and Kinnidy Wilmore (10) who each registed double-digit kills. Roslyn Zentz led the Diggers with 22 assists while Olivia Caddy had 14 digs on defense.

The Saints were led by Katherine McEuen's 10 kill effort.

Montana Tech wrapped up the Frontier Conference Preseason Tournament with a straight sets victory over the Battlin' Bears. Offensively the Diggers finished the match with 40 kills and hit for .191 clip at the net. The Battlin' Bears hit for just a .090 mark against Montana Tech.

The Diggers hit for an impressive .341 efficiency in the first set and were led at the net by Maureen Jessop who had a match-high 15 kills. McKenna Kaelber had 33 assists for the Digger attack while Olivia Caddy had 17 digs. Taylor Wolf had 12 kills to lead the Battlin' Bears. Montana Tech racked up 11 aces in service against Rocky.